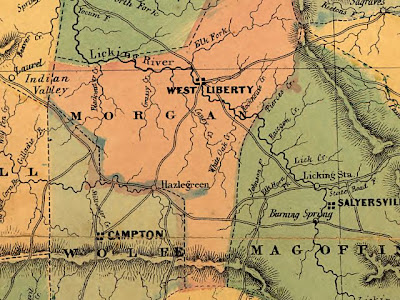 Morgan County, KY
Lloyd's official map of the State of Kentucky, 1862
Image from Library of Congress
On May 4th, 1867, elections were held in the Ninth Congressional District* for the office of Representative in Congress. The candidates were Samuel McKee, a Republican (or radical) and John D. Young, a Democrat (or conservative) as well as Thomas M. Green. Young won the election by a reported majority of 1,471 votes over McKee. The vote cast for Green was so so small that it did not significantly influence the outcome of the elections in one way or another.

Samuel McKee subsequently contested Young's election, questioning his opponent's loyalty to the Union during the Civil War. He also challenged the legality of certain votes, claiming they were cast by former Confederates who were ineligible to vote in elections. The President's proclamation of amnesty of May 29, 1865, specially excepted from the benefits thereof, "all persons who left their homes within the jurisdiction and protection of the United States, and passed beyond the federal military lines into the pretended Confederate States, for the purpose of aiding the rebellion." Therefore, on the 4th day of May, 1867, all returned rebel soldiers in Kentucky were not only paroled prisoners of war, but were also unpardoned rebels, whom the reconstruction acts had not affected, as they did not apply to Kentucky. Accordingly, former Confederates were not considered legal voters.
Furthermore, some of the judges of election had been in the rebel army, and were disqualified to act as such judge by the laws of Kentucky.

After establishing the facts of this case, McKee successfully contested John D. Young's election and served in the Fortieth Congress from June 22, 1868, to March 3, 1869.

During the lengthy investigation, a great number of people were questioned and gave affidavits in regard to voters in their respective counties who had served in the Confederate Army. The following information was given in Morgan County, Kentucky.

Deposition of Thomas B. Lovelace, Nov. 13, 1867
"the names of all those who voted for John D. Young ... at the Hampton Mills precinct, in this (Morgan) county, who, during the late rebellion, were in armed rebellion against the government of the United States and citizens of this county."

The following told me they were soldiers: James Pennington, Nelson Pennington, James Horton, John Click, J. W. Carter, G. P. Carter, and T. M. Fannin; the remainder of the list that I have deposed to I only know from hearsay.

The men whose names I have given were rebel soldiers, as they stated to me, at some time during the war, but whether they were so at its close I do not know.
William Myneer was, before the war, and when it began, circuit court clerk, and W. W. Cox, sheriff of this county. Both are said to have been engaged in the rebellion. I have heard them say so. William Myneer has been, since January last, county judge of this county, and W. W. Cox, the sheriff.

These are the names I remember to have been in the rebellion. Wm. H. Cartmill I saw with the rebel army; he was off with them, but told me he was only a tailor for them. I will add Uriah Elam. Ben. Wells was also with the army; saw him, and he told me he was. A. B. Reed was here at a fight; think he had a gun, but did not do much fighting; heard him say this. Geo. D. Phillips also had a gun, but told me he did not get into the fight; was out on the hill. Judge R. C. Day, who went up the hill with his gun, had his horse shot through the nose. Isaac N. Cottle was also a rebel soldier, and voted for Young. I think the above list comprises all whom I knew.

The following men were soldiers in the confederate army at the close of the war, as they stated to me, to wit: John Livingston, J. J. Culbertson, J. W. Kendall, Joseph Elam, Allen Barker, W. T. Havens, P. J. Livingston, Davis Johnson, L. Johnson, M. B. Cox, Wm. Mynhier, W. W. Cox, Sanford Davis, Lewis Henry, jr., Wm. Lewis, jr., E. Murphy, J. T. Williams and Woodson Johnson. These are all that I now remember of having stated to me they were soldiers at the close of the war.

Q. - Please state how you know the foregoing voters whom you say voted for J. D. Young for Congress in this district in May, 1867, were in the rebel army?
A. - They went off from my neighborhood in 1861, and a great portion of them were in Captain James Hunter's company.

The evidence also showed that at Little Sandy (Middle Fork) precinct, in Morgan County, G. G. Adkins, one of the judges of election, had been in the rebel army, and was disqualified to act as such judge by the laws of Kentucky.


This specific article was researched and written by Marlitta H. Perkins, August 2011, and is under full copyright. Copyright © 2011, All Rights Reserved.