Henry Madison Rust was born about 1827 in Virginia, possibly Loudon County, the son of Benjamin Rust and Frances Davis. His father was a well to do farmer and slave owner. Henry M. Rust studied law and by 1850 he was living in Pike County, KY, pursuing his trade as lawyer. He was boarding near the town of Pikeville with Thomas Owens and his wife Mary. Within a few years, Rust moved to Catlettsburg, Greenup (now Boyd) County, where he continued his law practice and susbsequently removed to Greenupsburg (present day Greenup). In 1857, Rust ran for the office of Kentucky State Senator on the Democrat ticket for the counties of Greenup, Carter and Lawrence. He won the elections and served as senator from 1857 to 1861. In August 1858, Rust leased space from the county court for an office that was to be built on the public square, fronting Main and Harrison Streets in Greenupsburg, for a period of 35 years, at a rate of $10.00 annually.

During the 1859-60 session, the Kentucky legislature enacted an ordinance to reorganize the commonwealth's militia. The law was signed by the governor on March 5, 1860. Officers were appointed and a variety of units were organized across Kentucky in 1860 and early 1861.
In Greenup County, local physician William S. Kouns began raising the Greenup Guards in February 1861, which were finally commissioned on March 16, 1861. Officers were Dr. William S. Kouns, Captain; James L. Warring, 1st Lieutenant; J. H. Blake, 2nd Lieutenant; and John P. Twyford, Brevet 2nd Lieutenant.

In addition to the line officers and regular State Guard Companies, an inspector for militia was appointed for each county. On May 29, 1861, Henry M. Rust was commissioned as inspector of militia for Greenup County, KY. The State Guards were, with a few exceptions, Southern in sentiment. Aided by the governor, as well as the adjutant-general and quartermaster-general, the State Guards controlled most of the arms of the state, much to the horror of the Unionists in Kentucky.

Henry M. Rust made no secret about his allegiance to the South when the Civil War erupted. Being a Virginian by birth, and his native State having declared for secession on April 17, 1861, he felt morally bound to follow her in the war. Rust found a kindred spirit in Dr. Kouns and it was feared by local Union supporters that both men would use their positions and influence to the advantage and support of the Southern Confederacy should Kentucky abandon its position of neutrality. Henry Blake, a member of Kouns’ company noted on May 7, 1861, “Is Mr. Rust Emproved with the full authority to Enroll Any Co into Service. Im Satisfied An Underhand game is being played with our Company to bind Myself with a Secesionparty in Any way. I firmly will oppose it __ to the Sacrifice of My life...”

During their regular meeting at the court house, members of the Masonic Lodge No. 89 in Greenupsburg circulated a petition, expressing their concerns about Rust’s position. According to Henry Blake, “a large remonstrance went up against Senator Rust. I did Not Sign it from personal Consideration though it in the Main spoke My Sentiment … Patriotism & Enthusiasm for the Union Unanimously prevailed." 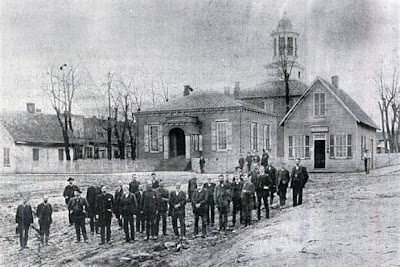 County officials in front of the Greenup County Clerk's Office (building with steps), showing the Court House in the background. Ca. 1890
Source: Greenup County Public Library
On May 4, 1861, during state-wide special elections for delegates for a border state convention, a poll was opened in Boyd County which was expected “to get all the votes”, demanding Rust’s resignation. J. Paul Jones wrote, “If Rust had made his appearance in Ashland on the day of the Election (Saturday) he would have been hanged higher than Haman. I like Rust personally, and hope he will not come back unless he changes his tacticks [sic], for i have heard grave, sober respectable men swear by their countrys Flag & the "God of Israel" that if he, acting as their Representative Misrepresented them, "death would be his potion."

Public sentiment did not influence Rust to digress from his chosen path and in the fall of 1861, he was actively engaged as recruiting officer for the Confederate Army. On Oct. 21, 1861, Colonel John S. Williams, a Mexican War hero, who was leading the effort to organize the 5th Kentucky Infantry and was later promoted to Brigadier General, directed a letter to Rust from Prestonsburg,

--I am in receipt of your of yesterday.

The army we are rallying here is intended to defend the mountains. We shall sweep the mountains of every foe before we move forward. The right mode for the mountain people to defend their homes is to come in at once and bring their guns. I received instructions from Richmond yesterday to muster in for twelve months.

Get up a force at once; a force strong enough to defend Pike county. I want a force at Pikesville immediately. I will muster them there for twelve months.

Attend to this at once; no time is to be lost. Don't rest a moment until it is done. 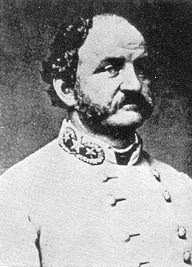 Colonel John S. "Cerro Gordo" Williams
On November 8, 1861, Union forces under Brigadier-General William “Bull” Nelson clashed with the Confederates under Colonel John S. Williams at Ivy Mountain in Pike County, KY. During the battle, Rust, who served with the rank of Lieutenant, was mortally wounded. General Nelson simply noted in his battle report, “Among the wounded in our hands is H. M. Rust, late State senator from Greenup County, Kentucky.”

Colonel Williams wrote, “In the Ivy fight our loss was 10 killed, 15 wounded, and 40 missing. Some of the missing men have gone back to their homes, and others join us daily. We lost Lieutenant Rust, who fell gallantly in the discharge of his duty.” 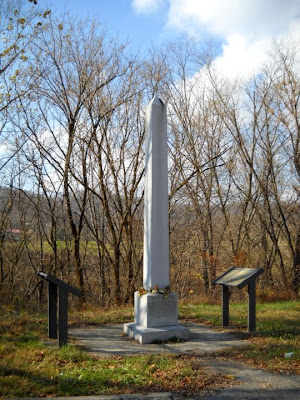 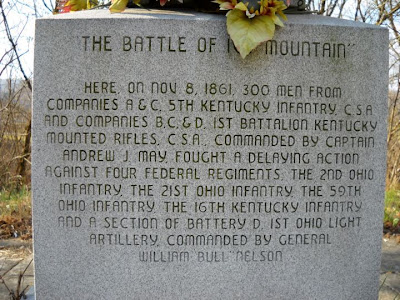 Close-up of Monument
Newspaper reports of Rust’s capture and death greatly varied, depending on the source consulted. The pro-Southern Louisville Courier wrote:

“We are exceedingly pained to hear that Hon. Henry M. Rust, of Greenup county, State Senator from that district, who was engaged in the brilliant achievement of our little army at Gauley*, near Piketon, on the 8th inst., fell pierced by seven balls and is supposed to be mortally wounded. His brave and impetuous spirit made him render his person too conspicuous a mark for the enemy. He was rescued by his comrades, who, after carrying him two miles, found he was too seriously injured to be conveyed further, when he was left at a farm- house in the neighborhood. Subsequently he was taken prisoner by the Lincolnites, who placed a guard over the house where he was lying.--We sincerely trust his valuable life may be spared although we know he would infinitely prefer death, than to be a prisoner in the hands of the Hessians.”

The Portsmouth Times of December 7, 1861, re-printed an article that appeared originally in the pro-Union Maysville Eagle.

Died Game
The generous can admire courage, says the Maysville Eagle, even in a public enemy, and we may well be excused for expressing sentiments of kindness toward the deceased Henry M. Rust, who was slain, fighting at his post, in the battle of Ivy Mountain. He was in command of a company from Bourbon county, and after they had deserted him and all the other rebels had left the field, he continued fighting alone until his body was pierced through and through by several bullets, and he had not sufficient strength to raise his rifle. When taken he was kindly cared for by Dr. Bradford** and other surgeons, but their skill was unavailing to preserve his life. Before his death he avowed that he had been conscientiously a Secessionist, and that he had been wounded in the discharge of what he had regarded as a duty, but that if it pleased God to spare his life he would abandon the cause of the Secessionists, with whose cowardice in the fight he had become disgusted. He died bitterly execrating the Bourbon poltroons, as he called them, who left him alone and sought only their personal safety. What a contrast such a death, lending dignity even to a bad cause, bears to the shameless conduct of Williams, who had seduced Rust and many others to conspire against their Government, but who was the first to flee, upon the approach of an enemy.”

The truth, undoubtedly, lies between the two above accounts. 27 years later, historian Dr. William Ely, who authored the book “The Big Sandy Valley”, wrote a sympathetic and somewhat sentimental account about Rust. Forgotten were the heated tempers and the excitement of the early days in the war. Time seemed to have erased the memory…

“His death was not only lamented by his Confederate friends, but he was mourned by the people of Boyd and Greenup with the most bitter sorrow; for all knew him to be a man of superior talents, and possessing a most generous nature. What made his fate the more sad was the fact that he was betrothed to a beautiful young lady, whose father was a distinguished senator. Some time after the battle his remains were carried to Catlettsburg, and buried.”

It is more than likely that Henry M. Rust was laid to rest in the Old Catlettsburg Cemetery. Later records do not list his name and today, the cemetery is more or less non-existent. His exact burial place is known but to God.


Notes:
*The battle on Nov. 8, 1861, took place at Ivy Mountain, in Floyd County, KY, not Gauley, which is in West Virginia.
**Dr. Bradford was General Nelson’s brigade surgeon.