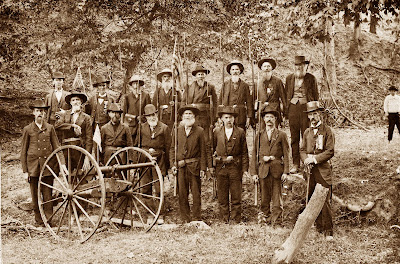 On September 28, 1894, a group of Civil War veterans gathered for a reunion at Paintsville, Johnson County, Kentucky. One of the day's featured attractions was CS General Humphrey Marshall's famed Williams Rapid Fire Gun that had been secreted from Marshall's camp in Ivyton, Magoffin County, on March 20, 1863, by Captain Reuben Patrick. Roaming through the sleeping camp, Patrick quietly unscrewed the 150 pound cannon from its frame, lifted it from its carriage and carried it into the nearby woods were he carefully camouflaging it with leaves. He later retrieved the cannon and brought it into the Union camp at Louisa.

After being stored in the arsenal at Frankfort for 30 years, the cannon was brought back to Eastern Kentucky by Captain Patrick. On September 28, 1894, Captain Patrick and local Civil War veterans proudly posed with their trophy. Johnson County Judge Joseph K. Dixon would also have the cannon brought to Paintsville for 4th of July celebrations. It is now on display at the Kentucky Military Museum in Frankfort, Kentucky.

Listed below are the Civil War veterans who have been identified up to this point. The photograph was found stored in a trunk in the attic of the home originally owned by Lt. Andrew J. Fox (standing on the right in the front row).  The house was torn down when Rt. US 23 was relocated.  It is now in the possession of a gg-grandson.

If you are able to identify the remaining unknown veterans, please let us know. Many thanks to Val McKenzie who graciously made this photograph available.

© May 2012. Unauthorized use and/or duplication of the images without express written notice by owner is strictly prohibited.
Posted by Marlitta H. Perkins at 7:29 PM 2 comments:

A Future President Comes to Visit!

One episode in the history of the Garred-Burgess House

On May 9, 2012, Lawrence County, as well as Eastern Kentucky lost an integral part of its history with the destruction of the Garred-Burgess House. Burned, bulldozed and torn down, with obviously little regard to its importance as a historic landmark, not a trace remains of the once stately home. A familiar sight for many generations of Eastern Kentuckians, it stood for nearly 170 years like a beacon on the Levisa Fork of Big Sandy River, near Patrick Gap in Lawrence County, Kentucky. The house had a rich history and served, among other things, as a hotel and maintained a reputation during the late nineteenth century "second to no other hostelry in the valley". Its final inhabitant was Dr. Francis Elam “Doc” Burgess, a much beloved local physician and poet.

And once upon a time, the Garred-Burgess House also sheltered a future president within its stone walls which is a little known fact.

In 1820, David and his wife Jennie (Graham) Garred, originally from Monroe County, Virginia, arrived in Kentucky and first moved to the falls of Tug River. The couple later settled on the property situated on the banks of the Levisa Fork and built a log house where they raised three sons and eight daughters. David Garrett died about 1838 and his wife in 1853. Both are buried in a stone vault above ground, located on top of the hill across the highway from the house. The entrance is of Vermont marble which was shipped to Kentucky from New Orleans by boat up the Mississippi, by push boat up the Big Sandy, and ox team up the hill. It was the first stone vault in the Big Sandy Valley, and could be seen two miles up and down the river - steamboat captains used it as a landmark.

After the death of their father, sons Ulysses and David W., continued to live with their mother in the log house, and began construction of the stone house. Built by slave labor, the native sandstone was brought by ox team from a quarry site one mile distant. The two Garred brothers later divided the farm and property. Ulysses retained the stone house and surrounding lands, while David W. received the adjacent property to the south where he built a two-story frame house.

Eastern Kentucky historian William Ely noted in 1887 that Ulysses Garred, "has been ranked as one of the foremost citizens of this section" and "a model farmer and trader.” He was elected to the State Legislature in 1848, and again served from 1873 to 1875. He "filled many other offices of note in his county, always with satisfaction to the people."

During the early stages of the Civil War in Kentucky, Union Colonel James Abram Garfield, future president of the United States, arrived in Louisa on December 22, 1861, to take command of the 18th Brigade, consisting of the 14th and 22nd KY Infantry, and 40th and 42nd OVI. His given objective was clear - to drive the Confederates under General Humphrey Marshall, whose advance up the Big Sandy Valley had reached as far north as Prestonsburg, out of Kentucky.

On December 23, 1861, Garfield mounted his horse "Billy" and led his forces out of Louisa, consisting of nine companies of the Forty-second Ohio and three companies of the Fourteenth Kentucky. During the night the rain had turned into snow, and an icy north wind had frozen the mud in the roads and made the hills slippery with ice. Garfield's men marched along the Big Sandy, on a wretched road that closely hugged the river. After a march of nine miles, during which the soldiers forded a single stream twenty-six times, they reached the "Stone House".

One soldier in the 42nd OVI noted that Ulysses Garred was, "the only slave owner I have met outside of Louisa, and he is a strong Union man." It was here that Garfield decided to spend the night. He found in Ulysses Garred a congenial host. A fellow Mason, he also had a jovial nature, "knew lots of jokes and was a good mixer."

Meanwhile, the soldiers established their camp in a muddy cornfield adjacent to the Stone House, amid the dreary discomfort of a cold, wintry rain, without tents or food. The push boats, carrying the men's supplies, were expected to keep up with the column but much to their dismay, were nowhere in sight. Thus the boys helped themselves liberally to Garred's chickens and pigs, "which passed away like a vision," and used his fence rails as firewood to warm themselves. The following morning, before taking up their line of march once again, the drums sounded the long roll, and the Ohio boys, sensing trouble, ran to assemble at attention. They formed a hollow square in front of their colonel, who looked down on them from his horse with obvious anger.

"Men of the 42nd, I thought when I left our old Buckeye State at the head of this fine-looking body of soldiers, that I was the proud commander of a Regiment of gentlemen, but your actions this evening, were I not better acquainted with each and all of you, would bitterly dispel that illusion. Soldiers, we came to KY to help her sons free her scared soil from the feet of the rebel horde ... Show these Kentuckians, who are your comrades under one flag, that you did not come to rob and steal ... and hereafter I shall believe that I command a regiment of soldiers, not a regiment of thieves!" After this brief lecture on the sin of confiscation, Garfield paid his disconsolate host for his losses out of his own pocket.

Around noon, the push boats finally arrived and the soldiers filled their haversacks with dry crackers, killed two beeves and distributed them among the men, "giving to each man a small slice which they took and roasted in the fire on the end of their ram rod, as we had no cooking utensils with us." An hour later, the soldiers were on the move. In the late afternoon hours, the column reached the mouth of George's Creek which was the appointed rendezvous for reinforcements and supplies. "Camp George", as the camp was named, served as a base of operations until Garfield was able to unite his brigade and continue his operations against Humphrey Marshall which finally culminated in the Battle of Middle Creek on January 10, 1862.

﻿
﻿Life continued in the Garred-Burgess House for another 147 years. It witnessed the end of the Civil War and slavery, and many other historic events that followed.  On March 2, 2012, it was hit by a tornado but stubbornly withstood the force of the winds. Sadly, the owner determined that it was beyond repair.  I respectfully disagree.  As of May 9, 2012, the Garred-Burgess House, once called "the most commodious stone house in the Sandy Valley", ceased to exist.


However, it will never fade from the memory of those who loved and revered it. It is memorialized in one of Dr. Burgess’ poems – a most fitting epitaph.