The Life and Times of Milton Freese

Milton Freese was born in Medina County, Ohio, on November 10, 1819, the son of John Freese and Sarah Stearns. Milton’s father was a native of Berkshire County, Massachussetts, but later moved to Kinderhook, New York. He worked as a schoolteacher at the Kinderhook Academy where he also tutored young Martin Van Buren. In 1816, John Freese and his family moved to the Western Reserve and settled in Brunswick, Medina County, Ohio, where he later became associate judge of Medina County.

In the spring of 1837, Freese moved to Cincinnati with his brother-in-law Archibald Miles, a somewhat controversial man who had run several stores in Medina County, OH, but cheated one of his business partners out of several thousand dollars. In 1833, Miles began experimenting with various vegetable extracts and began manufacturing "hygiene" pills of his own invention, taking several barrels full to Cincinnati. He assumed the title of Dr. Miles, reportedly set up a laboratory and began selling his pills under the name of "Dr. Miles' Compound Extract of Tomato." The product was endorsed by the Association of Physicians of which, coincidentially, Dr. Miles was the president and Freese the secretary. It should not be surprising that Miles and Freese were also the only members listed. A former neighbor from Medina stated, "With respect to Miles being a physician: when here he made no pretension of the kind...He was as far from it as any thing you can imagine." Miles began an aggressive advertising campaign and demand soon was strong.

Nevertheless, within a year, Miles ran into some problems with a direct competitor, Dr. Guy R. Phelps from Connecticut who was manufacturing similar pills. Rumors about the safety of Miles' product began circulating to which Miles responded with a full scale attack on Phelps in the New York Journal of Commerce in September 1838. The whole situation developed into a full scale and very public "Tomato Pill War" war that was slugged out for more than a year in the Connecticut Courant and various other papers. By 1840, sales declined and the market for tomato pills collapsed. Miles ended his national adertising campaign during the summer of the same year and both Miles and Freese turned their attention to other ventures.

In 1843, Milton Freese went into partnership with Dr. Miles and opened an auction house, "Freese and Miles", on Main Street in Cincinnati. By 1846, Miles was running a real estate brokerage firm by the name of "Miles & Co." which was located opposite the Dennison House in Cincinnati. Within the year, Miles had set his sights on Eastern Kentucky. Marcus T. C. Gould, a Cincinnati resident, invested in a huge tract of land surrounding the Esculapia Springs area, in Lewis County, KY. In April of 1846, Gould contracted with Dr. Archibald Miles, giving him the "sole privilege of erecting at Esculapia Springs buildings and appurtenances necessary to conduct all the sports and diversions usual to watering places in the United States." Miles was also given the right to erect a building to sell goods and wares.

In 1847, Milton Freese, Archibald Miles and his son George, as well as Robert Crutcher arrived in Prestonsburg, Floyd Co. KY, looking to invest in coal property. On Feb. 15, 1847, Miles entered into a deed and working agreement for over 110 acres with Burwell Vaughn, who had been operating a coal mine since 1843 on the Big Sandy River, south of and adjacent to Prestonsburg. Miles & Co. was in business. It appears that George Miles was in charge of operations, and Freese acting as trustee of Miles' Coal Mines.

Floyd Co. KY - Lloyd's Official Map of Kentucky (1863)
Note Miles' Coal Mines, south of Prestonsburg
Source: Library of Congress
Meanwhile, Freese began a courtship with Vaughn's daughter Minerva Jane, and on May 24, 1848, the couple was married in Floyd Co. KY. It was a happy union and over the next seven years, three children were born to the Freese family – Frank, Mary and Kate. The couple acquired a town lot on Main Street in Prestonsburg. Freese engaged in merchandising and became a money lender before the Civil War. In December of 1850, Freese became one of the commissioners for the newly formed Louisa, Paintsville, Prestonsburg and Pikeville Turnpike Road Company who endeavored to build a new turnpike, connecting the Owingsville and Big Sandy turnpike road with the Virginia turnpike road.

In the early 1850's, Miles' coal mines were experiencing money problems and Archibald Miles, who had left Floyd County before 1850 and was living in Cleveland, Ohio, claimed to be unable to pay off obligations and forced the creditors to file suits against Miles and to foreclose on the mortgages. In one of those suits, brought for a debt of $200 for "goods, wares, and merchandise, for work done and performed," the plaintiff's lawyer referred to Miles and his son as "the biggest rascals that ever was in the county." As a result of the lawsuits, Miles lost his interest in the Vaughn land and coal mine. It seems at this point, Freese and Miles parted ways for good. In May of 1853, Freese bought part of the property, under a court order, James P. Harris, complainant. By the end of the 1850's, Freese held separate mortgages on property owned by each of the local mining companies.

In April 1858, Freese obtained a license to open a tavern at his residence. Eight months later, he moved his tavern across the street from his house and into a barn that stood on a town lot also owned by him. Business was good and Freese renewed his license for the next two and a half years.

He also held the office of postmaster at Prestonsburg for a number of years, from 1851 until before 1854. In 1860, Freese and his family were living in household #22 in Prestonsburg, Floyd County, KY. He was a merchant, with $3500 real estate and $4105 personal property.

When the Civil War broke out, Freese soon became a supporter of the Confederate cause but in a more or less civilian capacity. There is no documentary evidence that he actually joined the military. In the fall of 1861, James Weddington, who lived on the main road between Prestonsburg and Pikeville, about five miles below the latter place, saw Freese, accompanied by John M. Rice. According to Weddington, neither of the men wore a Confederate uniform, even though Freese had a new belt and gun. Freese made his wagon and team available to the army and reportedly participated in foraging raids on Union supporters. However, his activities were soon put to an end.

On November 6, 1861, Freese was indicted in the US District Court at Frankfort under Judge Bland Ballard, on the charges of treason and robbing the US mail at Prestonsburg. On January 27, 1862, Freese was arrested at his home in Prestonsburg and sent to Newport Barracks. Here he was held as prisoner, awaiting trial, until February 10, 1862, when he was transferred to Camp Chase, Ohio.

On February 11, 1862, James Harlan, US Attorney for the District of Kentucky, addressed a letter to the Commandant of Camp Chase, requesting that Freese “under no circumstances he be released from imprisonment. “ Harlan informed the commander that, “I will send a Marshall for him between now and the Next term of our court provided I can obtain the attendance of the witnesses who deposed against him before the Grand Jury.” 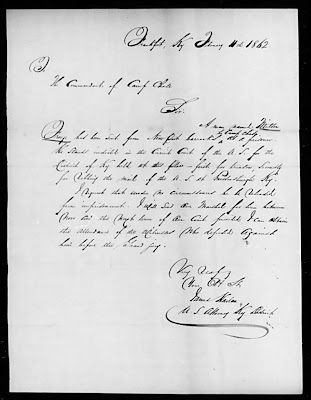 Milton Freese remained a prisoner at Camp Chase for another nine months until finally released on Nov. 8, 1862, by virtue of an order by the US Secretary of War and upon taking the Oath of Allegiance. Freese was listed as a resident of Floyd County, Kentucky and described as 42 years old, fair complexion, dark hair and whiskers, 5’11” tall and hazel eyes.

During Freese’s absence, his wife Minerva Freese was attending to her husband’s affairs at Prestonsburg. On Oct. 28, 1862, Capt. W. W. Cox, Quartermaster of the 5th KY Mounted Infantry (CS), paid Minerva $10.00 for use of the wagon and team and damage done to same while hauling Guns and ammunition from the Forks of Middle Creek to the Pike County Steam Mill on Sandy River.” 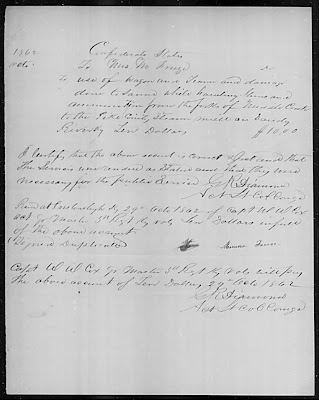 After his return to Eastern Kentucky, Milton Freese gave up his residence in Prestonsburg and moved to Louisa, Lawrence County, KY. His war-time activities seem to have come to an end and he turned to more peaceful pursuits. Freese operated a livery stable in Louisa. He also engaged in steam boating on the Big Sandy and Ohio Rivers and established the first reliable and successful packet line. The Sallie Freese and Fannie Freese, named after two of his daughters and the latter piloted by his oldest son Frank, and the Fleetwood, owned in partnership with R. F. Vinson, were three of the better known steamers that were plying the waters of the Big Sandy and Ohio Rivers in later years. 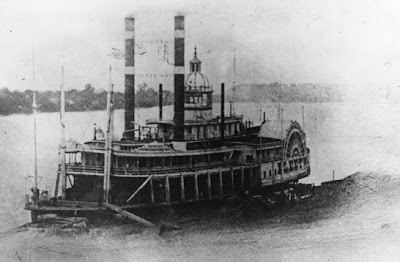 The Fleetwood, at Ironton, OH, 1866
From R. L. Hunster collection.Wiki of The Public Library of Cincinnati and Hamilton County
In 1865, Milton Freese suffered the loss of his wife Minerva. At the end of the year, Freese’s past came to revisit him one last time. On December 28, 1865, Payne Johnson from Pike County filed a lawsuit against him and other parties, claiming that during the fall of 1861, Freese, as well as James M. Rice, John M. and Harvey Burns, John and L. B. Sword, Thomas and C. Cecil, and Thomas May, Sr., took, “with force and arms and against the will and consent of the Plaintiff,” a large lot of personal property from him, including horses, live stock and forage.

In November 1867, Milton Freese married Kate McGuire, of Louisa, the daughter of Nicholas McGuire. In 1872, the couple purchased an antebellum two-story brick house plus five acres in Louisa from former Union Captain Thomas D. Marcum (14th KY Infantry) for $3,150. The house is still in existence today and is located at the end of Sycamore Street, overlooking the Big Sandy River. 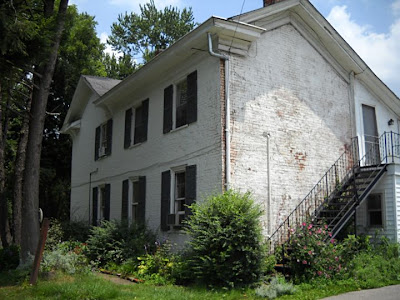 Freese House, Louisa, KY
Freese later established the Louisa Roller Flouring-Mills which had a capacity of seventy-five barrels per day. Despite being a successful business man throughout his life, Freese fell onto hard times and in 1894 had to sell his house in Louisa at auction for $200, reportedly the amount of debt he owed. 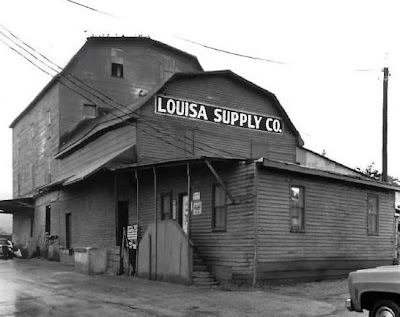