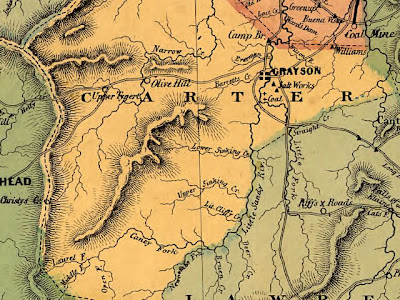 Carter County, KY
Lloyd's official map of the State of Kentucky, 1862
Image from Library of Congress
On May 4th, 1867, elections were held in the Ninth Congressional District* for the office of Representative in Congress. The candidates were Samuel McKee, a Republican (or radical) and John D. Young, a Democrat (or conservative) as well as Thomas M. Green. Young won the election by a reported majority of 1,471 votes over McKee. The vote cast for Green was so so small that it did not significantly influence the outcome of the elections in one way or another.

Samuel McKee subsequently contested Young's election, questioning his opponent's loyalty to the Union during the Civil War. He also challenged the legality of certain votes, claiming they were cast by former Confederates who were ineligible to vote in elections.

During the lengthy investigation, a great number of people were questioned and gave affidavits in regard to voters in their respective counties who had served in the Confederate Army.

I will provide the list of names as they were given, by county. The first installment, August 3, 2011, covered Morgan County Confederates. The following information was given in Carter County, Kentucky.

Q. State what men, if any, voted for John D. Young at the general congressional election in May, 1867, in Carter county, who had been in the so-called Confederate States army.

All the above named men were in the rebel army. I saw the most of them in the rebel army, and heard the balance say they were in it; but as to this, of my own knowledge, I do not know...I think there were near two hundred men went from Carter county into the rebel army.

Q. Have you examined the poll-books of Carter county for the general congressional election in May last; and do you know how many, if any, votes were given for John D. Young by men who had been soldiers of the army of the so called Confederate States of America?

A. I cannot give any number that I positively know to have been in the rebel army. The following named persons appear upon the poll-books of Carter county at the May election, 1867, as voting for John D. Young, viz: F. M. King. John T. Horton, jr., Squire O. Cox, I. Horton, Shelby Nickel, John M. Elliott, William Goble, B. W. Ward, Thomas A. Frizell, William E. Miller, Rees D. Horton, Huston King, J. C. Rabbe, John T. Horton, Adam Cox, E. B. Elliott; of the above-named persons I have heard F. M. King, Squire O. Cox, I Horton, Shelby Nickel, William Goble, B. W. Ward, Thomas A. Frizell, Huston King say that they were in the rebel army. Witness never saw any of them actually in the service, but saw Thomas A. Frizell while he was a prisoner, and heard him say that he was a rebel prisoner; also saw Adam Cox while a prisoner, but knows nothing about his ever being in the rebel army. That E. B. Elliott, John T. Horton, J. C. Rabbe, Rees D. Horton, William E. Miller, and John M. Elliott were absent from Carter county part of the time, some of them nearly all the time, and were said to be in the rebel service. I have heard nearly all of them talk about being with the rebel army, and being in the State of Virginia. John T. Horton, jr., appears to have voted for John. D. Young. If this John T. Horton, jr., is the son of Travis Horton, witness has heard him talk about being in the rebel army. I have examined the poll-books of Carter county at the May election, 1867.

Q. Don't you know that a great many of those persons you speak of as having been in the rebel army left that army during the latter part of the year 1862 and came home, remaining at home during the remainder of the war ?

A. I know that some of the persons I named above came back to Carter county about the latter part of the year 1862. John M. Elliott, F. M. King, Squire O. Cox, T. Horton, William E. Miller, Rees D. Horton, I think, came back about that time, as I now remember it.

Q. Do you not know that some others of them came back soon after the year 1862, and remained at home until the war was closed?

A. John T. Horton, jr., I think, came back in the summer or fall of 1863, and remained at home during the balance of the war.

Q. How many of those men named by you were members of the thirty-first regiment Kentucky enrolled militia, who were called into the service; by whom called; and did they not act in concert with the Union army?

A. F. M. King and Squire O. Cox were called out as active militia by an order of Governor Bramlette, and served as such for some time during the summer of the year 1864, and acted in concert with the Union army. My best recollection is that John M. Elliott and William E. Miller were also called out, and served in the militia at the same time.


Deposition by Moses Nethercutt, a resident of Carter County, November 29, 1867

Q. How many persons, if any, voted for John D. Young in Carter county in the May election, in 1867, who had been in the army of the so-called Confederate States?

Q. How do you know that the persons named in your examination were rebels and voted for J. D. Young?

A. I saw twenty or more of them going through the country wearing gray clothes; the rest of them told me they had been in the rebel army. I do not know of my own knowledge that any of these men were sworn into the confederate service.