Antebellum oil company
The end of the Civil War marked the start of an oil boom in Eastern Kentucky. The antebellum petroleum legacy of Kentucky began in 1818, with a well drilled for salt. Salt-wells were bored, and some oil was found at the mouth of Blaine, Dean bend, Taber's creek, Tug Fork, Warfield, and mouth of Middle creek. Considerable difficulties were encountered in getting rid of the oil, and in some instances, the wells were abandoned in consequence of not being able to tube it out.

The Big Sandy River and its tributaries had long been known as productive of oil, the surface of the streams being frequently discolored with patches of floating oil, arising from oil springs in the bed of the stream and in the pools adjacent. For many years this surface oil was gathered in large quantities by skimming it from the surface, and used for various domestic and medical purposes. Kentucky soon became a center for the rapidly expanding coal oil industry in the 1850s. This was the focus for the first Kentucky geological survey (Owen, 1856; 1857a; 1857b; 1861), which systematically described and analyzed a large number of coal beds for their economic potential, not only directly as a fuel, but for their oil or gas yield. About 1855, Cummings & Dixon collected a half-dozen barrels from Paint Creek and treated it at their coal-oil refinery in Cincinnati. They continued to collect oil from Paint Creek and Oil-Spring Fork until the Civil War, at times saving a hundred barrels a month.

In 1859 and 1860, a number of shallow wells were sunk along the valley, all being put down by hand, and reaching the depth of from one hundred to two hundred feet. In 1861 they drilled a well three-hundred feet on Mud Lick, a branch of Paint Creek, penetrating shale and sandstone and getting light shows of oil and gas. Surface-oil was found on the Big-Sandy River, from its source to its mouth, and in considerable quantities on Paint, Blaine, Abbott, Middle, John's and Wolf Creeks. Large springs on Oil-Spring Fork, a feeder of Paint Creek, yielded a barrel a day. At the mouth of the Fork, in 1860, Lyon & Co. drilled a well two-hundred feet, tapping three veins of heavy oil. The same year a well was sunk one-hundred-and-seventy feet, on the headwaters of Licking River, near the Great Burning Spring. Gas and oil burst out for days, but the low price of crude and the impending Civil War put an effectual stop to oil operations in Kentucky. 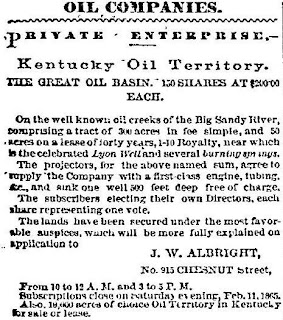 Advertisement for Eastern Kentucky oil leases
Philadelphia Inquirer, Feb. 10, 1865
By the end of 1864, there was a renewed interest in Eastern Kentucky oil operations which resulted in a regular oil fever. The whole line of the river and its tributaries was "prospected" by speculators, up as far as it was safe to go for the guerillas who were still prowling in areas of Southwestern Virginia and the Kentucky border. Most of the land was leased by Eastern and Northern capitalists, and the preliminary work for sinking numerous wells was begun. Hundreds of wells were drilled, boats were crowded and the hotels were filled with strangers. A letter from Catlettsburg, written in January of 1865, gives a vivid picture of the situation,

Within the last two months this staid and quiet community has been aroused to an unusual degree of activity and excitement by the influx of oil-seekers from all parts of the country. At that time few strangers were to be seen here, except those who were connected with the military operations of this district, and the usual topics of conversation were results of recent elections, military movements, condition of the crops, etc. But a change has taken place. The hotels and streets are now filled with strangers, and every boat up Sandy carries numerous eager seekers after oil-territory. Turn where you will, in the hotels, on the boats, the groups of men you pass upon the street, and even in the family circle, you hear but one common subject of conversation — 'Oil ! oil ! oil !' As I have heard nothing but oil for the last few weeks, I have become pretty heavily charged, and have concluded eluded to relieve myself of the excess by writing you an oily letter, giving you a brief history of oil operations in the Sandy Valley. " 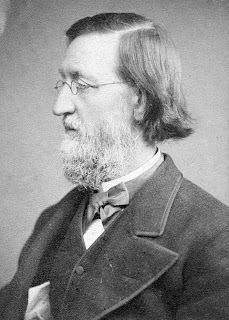 J. Peter Lesley (in 1877)
One of the men who ventured down the Big Sandy Valley was J. Peter Lesley, an American geologist who made extensive and important researches in the coal, oil, and iron fields of the United States and Canada. He eventually became became State geologist of Pennsylvania in 1874.
Prof. Lesley was secretary and librarian of the American Philosophical Society from 1858 till 1885. He was also a member of various other scientific societies, and was one of the original members of the National Academy of Sciences. In 1884 he was president of the American Association for the Advancement of Science.
In March of 1865, he undertook a trip to Eastern Kentucky. What follows are his observations during this time.

Cincinnati, March 21, 1865.
...This afternoon...I take a boat to Catlettsburg...river steam for Louisa...and another to Paintsville, where our headquarters will be made...I take the taste of the world out of my mouth, now and then, with a chapter of Dickens. His last is better than his first.
Here is a typical week of geological campaigning: -

...March 20th: We embarked on the Telegraph at Cincinnati and were compelled to lay up, the Tuesday night following at Portsmouth, by a great storm, which overturned the Marietta steamboat, loaded with passengers; but all were saved.

March 23rd: We took the Victress up Sandy to Louisa, and attempted to take the little river there, for Paintsville; but the storm continued, blew us ashore, and obliged us to spend the night in this rattletrap. We walked up to the fort, and had a merry party.

March 24th, Friday, we started on the River. I wish you could have seen us! and were all day getting up to Buffalo shoals, upsetting on our way a small boat full of people and a dead man in a coffin, creating a great excitement. After dark we formed a procession of fifty men and two women with lanterns, and walked and waded, climbed and stumbled over to Paintsville three miles.

March 25, Saturday: We could get no horses and I spent the day talking oil and studying my reports, and notes of Owen, Lyon, and Joe's, and got my first night's sleep.

March 26, Sunday: Five of the party started on foot up Paint Creek, and Ogden Lewell and I, on horses, into the most tremendous land of crags, ravines, cascades, oil springs, forests and guerillas, and reached Wash Webb's, to sleep in a cabin, while an old woman with a pipe studied curiously our mode of undressing. Before retiring we had a guerilla fright; not a pleasant episode. We rode cavalry horses, by the by.

Monday, 27th: Having opened communication with the foot party (who got lost among the precipices), we continued up three miles to Lyon's well, got some specimens of oil rock, waded the creek forty times, found the XI iron ore, and joined them five miles up Little (Oil) Fork of Paint, where we ate chicken, filled our bottles with tar, smoked the pipe of peace, discussed plans for the future, and the best mode of cutting up the 100,000 acres. Back three miles across the bend to Williams' (where the foot party had spent the night) and left them there unable to proceed. I got Carlisle to ride with me back to Paintsville, were we arrived nearly dead with fatigue. I had been very sick in the night with a sort of inflammation of the lungs, and asthma in the morning which has stuck with me ever since.

Tuesday, 28th: Lucky in finding the Red Brick (a scow with a locomotive on board) descending to Louisa, at daybreak. Unlucky in not taking the Rover when we passed her lower down. Were arrested by the military post at Louisa, who wanted the boat, and obliged to spend the last night there (here).

Wednesday, 29th: Desperate finding the Red Brick impressed, and no certainty of the Victress, Mason or Clarke getting up, because the waters have fallen. If they do, I shall be in Catlettsburg to-night, and try to reach Pittsburg by Saturday, April 1st, a precious fool for ever embarking on such an expedition...

Posted by Marlitta H. Perkins at 9:20 AM