Among the Guerrillas - Adventures of Alfred Harrison, Lewis County Surveyor

The following statement by the Surveyor of Lewis County, Ky., will be of interest, as the locality and party are well known to many of our readers. As an expose of the condition of affairs on the border it derives its chief interest. He says:

“I will say that I am the Surveyor of Lewis county, and while I was discharging my official duties as Surveyor in the eastern end of my county, in company with six other gentlemen, we called at the house of a gentleman named Bloomfield, who lives on the Laurel Fork of the Kinnekinick (Kinniconick), for the purpose of lodging with him for the night – About dark the house was suddenly surrounded by about thirty men who soon robbed us of what money we had and other valuables. I lost about eight or ten dollars in money; a mare that I had been offered one hundred and fifty dollars for, and also a saddle and bridle, worth about fifteen or twenty dollars. A man that was with me lost, as he said, over one hundred dollars in money, and also a valuable watch. Another one of our company lost some money and a watch, and also his hat. Others lost money and clothing. In short, all that we had that was valuable they took.

They also robbed the house of Bloomfield of everything that they could find that was desirable, even taking and eating the victuals that were being cooked for our supper. And all this we had to bear as best as we could, as they were armed with rifle muskets, shotguns and pistols and greatly outnumbered us, while we had nothing with which to defend ourselves.

This gang of rebel ruffians had the audacity to tell us that they were men who had been drafted in Lawrence county for Government service, and were on their way to report.

And after they had robbed us and left the premises a short time, they returned and inquired for the Surveyor. I immediately walked to the door and reported to which they replied they wanted me to point them to Greenupsburg. I told them I could not do it, as it was very dark, and did not know the way. They said I knew more about it than they did and I should go with them – So I concluded that “prudence was the better part of valor.” I put on my hat and mounted a horse that they had taken from Bloomfield, and hitched at the fence for me to ride, and off we went. I and a man they called Capt. Fults, rode in front. After we had traveled a short distance, he asked me if I could take them to Vanceburg. I told him I could. He then said I might take them to Vanceburg, and there would take passage on a boat to Greenupsburg. 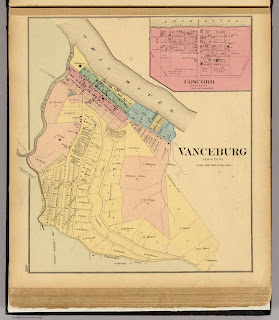 On the way he inquired of me particularly who had good horses in that section of the county, and who kept shoes, boots and ready-made clothing in Vanceburg for sale, and whether there were any soldiers quartered there. - They also inquired if George M. Thomas, an elector for Lincoln and Johnson, lived in Vanceburg, and if there was a flouring mill in Vanceburg, that made flour for the Government. As we traveled on our way, some one would frequently call the Captain towards the rear as I supposed, to hold a consultation with him, and the another man would ride up by my side. I would then seize the opportunity to ask him some questions. On one of those occasions a young lad rode up by me, and I,” When did you leave Lawrence county?” “Last Monday,” said he. Said I, “This is Friday night; where have you been all this time?” “We have been out on a scout,” said he. “Last Wednesday we were in Flemingsburg, and we lost four of our men there.” “How did that happen?” said I. “Why,” said he, “we went in there in the night, and either the citizens or Yankee soldiers shot at us from the houses and killed two of our men and mortally wounded two more of them.”

On our way, the Captain and some others called at the house of a man named Blankenship, and took from him two coats, and a gun. A little further on they all stopped to feed their horses with some corn and fodder, which they took from the field of a Mrs. Cooper, and while their horses were eating they robbed several other houses. We then mounted our horses and rode to within about three miles of Vanceburg, but we had advanced but a short distance until we were met by Col. Clark and five other men on horseback, all citizens of Vanceburg. “Halt,” said the gallant Colonel. We halted. “Who are you?” said he. “We are conscripts from Lawrence county,” responded the rebel captain. “We are going to Greenupsburg to report. “Advance, one in number,” said the Colonel. “Who are you,” said the rebel Captain. “We are citizens,” was the prompt reply of the Colonel. Receiving this answer, the Captain then ordered his men to fire. – It was done. The Colonel and his men returned the fire and then retreated. The rebels pursued, but soon received a volley from some noble Union citizens who were waiting in ambush to receive them. The rebels then retreated a short distance and held a council. Some were in favor of making another effort to go into town. Others opposed it, saying that the road was lined with bushwackers. The Captain asked me if there were not Yankee soldiers in town. I told him I did not know. “But,” said I, “I do know there are a great many home guards there, and I have no doubt but they will give you a warm reception if you go in.” They then retreated in haste.

Time and space will not allow me to give particulars, but suffice it to say that they robbed every man they met on the road, taking their money and stripping off their clothes, boots, shoes and hats, and carrying them off. They also robbed almost every house on the way, searching the stables and took every good horse they could find. They even carried off in triumph, every good horse that they met on the way, either under saddle or in the harnesses. Such are the acts of a set of scoundrels, with whom many of the men living in the Loyal States, and pretending to be good citizens sympathize. But these are nothing more or less than fair specimens of the great masses of the people who are seeking to overthrow this Government. And, now, I will close this sketch by saying, that those who read this may hear from me at some other time.

Alfred Harrison mentioned a gentleman by the name of Boomfield but it is unclear if it was John, James or Reuben Bloomfield's house where he and his party planned to spend the night.

George M. Thomas, 1860 Lewis Co. KY Census, HH# 821/821. In 1864, he was 36 years old. George M. Thomas was born on November 23, 1828, on Salt Lick Creek, near the valley in Lewis County, educated in the common schools in the county — taught school, read law, and was admitted to the bar in 1851. Elected school commissioner in 1850, and served nine years. Elected county attorney in 1854, and served four years. Elected a member of the Kentucky Legislature in 1859, and re-elected in 1861. In 1862 elected Commonwealth attorney in the Tenth Judicial District, and served six years.

Several Coopers lived in William Blankenship's neighborhood. Mrs. Cooper was most likely the wife of Hiram B. Cooper who owned a farm next door to Blankenship. 1860 Lewis Co. KY Census, HH# 1370/1370. Hiram B. Cooper was away from home at the time of the robbery, serving in the Union Army in Co. K, 16th KY Infantry. He would not return home before summer 1865, leaving it up to his wife Catharina to run the farm and deal with situations like guerrilla raids.

Captain Fults' identity remains unknown. Harrison indicated that Fults was of Confederate persuasion which seems unusual since all Fults/Fultz men who ever served in the military in Kentucky during the Civil War were in the Union Army. Further research is needed.

Links of Interest
Kinniconick Creek: A natural and historic treasure of Lewis County, by Dr. William M. Talley
Posted by Marlitta H. Perkins at 12:30 AM