This post will be the first in a series dealing with Union burials in Eastern Kentucky, beginning with Louisa, Lawrence County.

Throughout the years I have received numerous inquiries regarding the burial sites of Union soldiers who died in Eastern Kentucky during the Civil War. Contrary to popular (or logical) assumption the majority of these men are not resting in Kentucky soil but were taken to Indiana to be re-interred in the New Albany National Cemetery. Why, you may ask?

On July 17, 1862, Congress passed an act that those who gave their lives in defense of the Republic should rest forever within the guarded confines of a national cemetery. Immediately following the end of the Civil War in 1865, the Quartermaster Department, being tasked to care for the Army's dead, initiated plans plans to locate and exhume human remains from battlefields and other temporary graves to concentrate them in national cemeteries. General Orders No. 40, issued July 3, 1865, sought lists of interments registered during the war, but only documentation for less than 30 percent of the dead was produced; it then became necessary to review casualty reports. As a result, General Orders No. 65, issued on October 30, 1865, requested the locations of cemeteries and gave recommendations for their preservation.

A joint resolution of Congress, approved April 13, 1866, authorized and required the Secretary of War “to take immediate measures to preserve from desecration the graves of soldiers of the United States who fell in battle or died of disease in the field and in hospitals during the war of the rebellion.” National cemeteries were officially established with the Act to Establish and to Protect National Cemeteries, approved February 22, 1867.

The work of the Quartermaster Department proved to be enormously challenging. The vast majority of the graves were marked with temporary wooden headboards which were either decaying, had fallen to the ground  or were completely destroyed. Efforts were made to locate witnesses who could point out the graves and/or identify the soldiers and the circumstances of their deaths. However, only 58% of the disinterred and reburied soldiers were identified. Despite the difficulties encountered the work went forward so rapidly between 1866 and 1870, that the Cemeterial Division had disinterred the remains of nearly 300,000 war dead and laid them to rest in 73 newly created national cemeteries. In September 1871, the numbers had risen to seventy-four national cemeteries containing the remains of 303,536 Union soldiers.

During the war, Louisa developed into a Union strong-hold. It was here, where the 14th Kentucky Infantry was organized in 1861 and from where Garfield launched his Eastern Kentucky Campaign. Louisa became the seat of the Military District of Eastern Kentucky which included a Provost Marshall's office, and thus functioned as a main point for prisoner transportation down the Sandy River for transfer to Camp Chase, Ohio, as well as other military prisons. When the organization of US Colored Troops began in Kentucky, Louisa was designated as a camp of reception for recruits for the Ninth Congressional District on June 13, 1864. However, on July 13, 1864, the point of reception was changed to Ashland, Boyd County, Kentucky, by order of the Secretary of War.

During the summer of 1864, the US military began construction of Fort Bishop on the hill towering above Louisa to protect the town against Confederate raids. A detail of forty-seven soldiers of the 109th USCI supplied the labor for the construction of Fort Bishop, which, partially finished, occupied a commanding position above Louisa from the top of town hill.  The fort was 3/4 completed, including the magazine, and was armed with 7 field guns, when the project was finally abandoned in 1865, due to the end of the war.

Five burial locations were identified by the US Quartermaster Department at or near Louisa, with a total of 86 graves. Two burial sites were located on a hill above the town, site of present day Pine Hill Cemetery - Section No. 1 was designated for white soldiers, Section No. 2 for US Colored Troops, located 200 yards north of Section No. 1. The third location was on Judge Clayton's Farm. Locations four and five were situated on the farms of Mr. Vinson and Mrs. Davidson, respectively. Plat maps were furnished for each location and are included here. 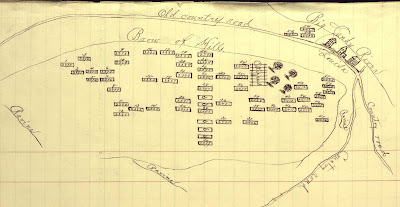 Buried at Louisa Ky. 3/4 of a mile west of town in an old cultivated field in Citizens Graveyard ~ graves in very poor condition. Coffins in good order. The Graveyard is on Thomas Wallace's land ~ all graves marked "C" are Citizens graves 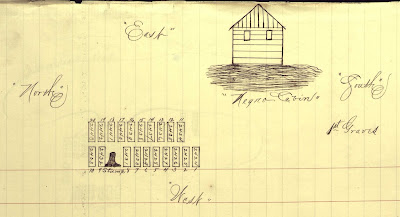 Buried 3/4 of  mile west of Louisa and 200 yards north of 1st graves on a rough hillside on Mr. Wallace's land and 100 yards north-west of an old Negro Cabin - graves in good condition ~ buried in two rows. Old stump between 8 and 9 ~ all are unknown. No headboards.

All burials were listed as unknown colored. 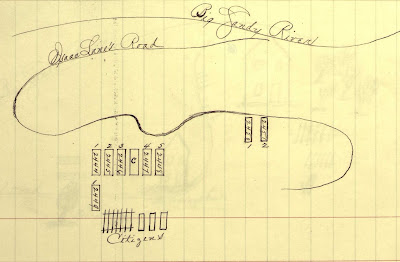 Buried on Judge Clayton's land 1 1/2 miles North West of Louisa in the woods and 350 yards North East of Small Pox Hospital - in poor condition - only two Headboards standing and they were defaced so that they cannot be identified. Graves marked "C" in plat are citizens. 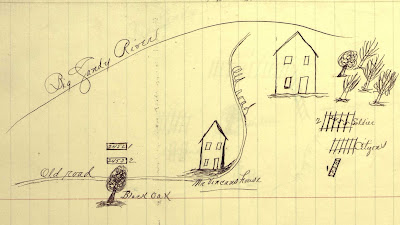 Buried on Mrs. Davidson's farm 3/4 of a mile South East from Louisa on opposite side of the road from Mr. Vincan's house.

Roll of honor; names of soldiers who died in defense of the American union, interred in the national [and other] cemeteries. 27 volumes. (Available on Hathi Trust Digital Library)