General Order No. 143 established the Bureau of Colored Troops on May 22, 1863. Adjutant General Lorenzo Thomas authorized some recruitment in western Kentucky in 1863, however, not until the Conscriptive Act of February 1864 was passed did the enlistment of slaves and free blacks begin in Kentucky. Loyal slave owners were supposed to be compensated. During the course of the Civil War, 23,703 blacks from Kentucky enlisted in the Union Army. Kentucky raised 21 US Colored Regiments, only outnumbered by Louisiana.

Recruiting for black troops in Eastern Kentucky began in the early summer of 1864. General Order No. 20, dated June 13, 1864, specified that,

"Recruiting of colored troops will take place in the State of Kentucky as rapidly as possible, and one or more officers will be placed in each county to receive the able-bodied colored men as they present themselves or are delivered by their owners. The unconditional Union men will, it is believed, cheerfully bring forward their slaves to assist in crushing the rebellion; and if others do not, it makes no difference, as all who present themselves for enlistment will be received and enlisted into the service of the United States.
In order that the State may receive credit for the volunteers thus secured, and that the rights of all may be protected, recruiting officers will present their recruits to the provost-marshal or deputy provost-marshal for enlistment, and the latter officer will furnish the owners of the slaves with the necessary certificate of enlistment."

Louisa, Lawrence County, KY, was designated as a camp of reception for recruits in the Ninth Congressional District, but on July 13, 1864, the point of reception was changed to Ashland, Boyd County, KY, by order of the Secretary of War.

Recruiting efforts seem to go well in Eastern Kentucky although there was an apparent uneasiness among the new recruits. The "Ironton Register"(OH) reported in June 1864, that, "The negroes of Greenup and adjoining counties in Kentucky are enlisting into the United States Service very rapidly. At last accounts one hundred and fifty of them were encamped near Greenupsburg. As they are without arms, they manifest some alarm lest the guerrillas should come in and massacre them after the manner observed at Fort Pillow."
The latter remark referred to an incident that took place on April 12, 1864, at the battle of Fort Pillow, Tennessee. It ended with a massacre of surrendered Federal African-American troops by soldiers under the command of Confederate Major General Nathan Bedford Forrest after Fort Pillow "had ceased resisting or was incapable of resistance."

The 5th USCC participated in Burbridge's Raid from Kentucky into Southwestern Virginia September 20-October 17, 1864 which resulted in the first battle of Saltville on October 2, 1864. It was here that a number of wounded and helpless soldiers of the 5th USCC were murdered after the battle. This is commonly known as the Saltville Massacre.
The 5th USCC also took part in General Stoneman's Raid into Southwestern Virginia, from December 10-29, 1864. The unit was near Marion on December 17-18, 1864, and participated in the capture of Saltville and the destruction of the salt works, December 20-21, 1864. 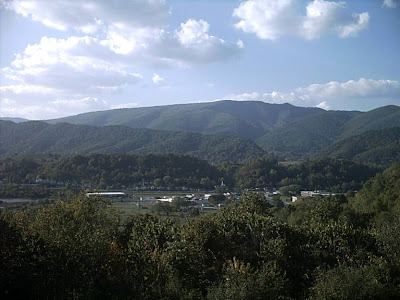 During the latter action, Henry J. Hord was killed in action and James Everman lost his left arm, "while faithfully discharging his duty as a soldier; he is a Brave and true soldier." 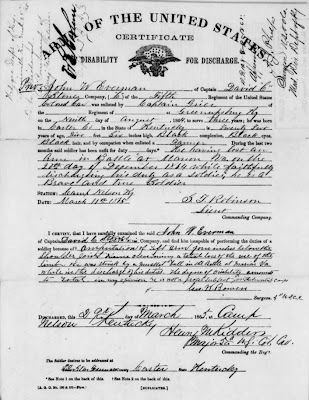 John W. Everman's Discharge Certificate
One soldier, Charles Bowling, was murdered at Burnside Point, Pulaski County, KY, on Nov. 1, 1864. The exact circumstances of his death are unknown and not part of his military file.

Other men from Greenup County who may have served in the Union Army were James Winn, Jack Kibby, Harvey McConnell and William Rollins but more research is needed to confirm their exact service records.

At least two Magoffin County men, Nelson and Stamper Gardner, enlisted in the US Colored Troops. Both were slaves of Sarah "Sally" Gardner, who was the largest slave owner in the county and an avid supporter of the Southern cause.
38 year old Stamper Gardner enlisted at Camp Nelson, KY, in Co. C, 6th US Colored Cavalry. The unit participated in Gen. Stoneman's Raid into Southwest Viginia, December 10-29, 1864, which led to the destruction of the saltworks at Saltville, Virginia. While on this expedition, Stamper Gardner lost the toes of both feet from frost bite while in the line of duty. 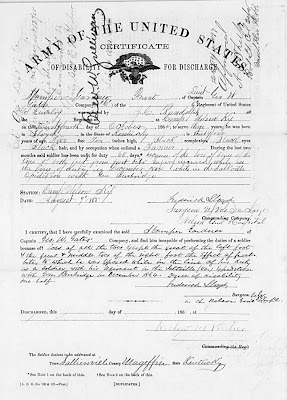 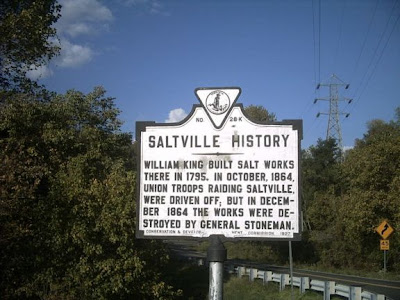 Hiram H. Allison, a slave of Dr. Judge John Clayton, Sr. from Lawrence Co. KY, served in Co. H, 109th US Colored Infantry. During the summer of 1864, when the 109th US Colored Infantry was stationed at Louisa, KY, Hiram, or "Hi" as he was generally known, was riding with a white recruiter through Lawrence County telling the slaves that they would receive their freedom if they joined the Union forces. When the 109th USCI was ordered to depart Louisa in October 1864 in order to join Army of the Potomac before Petersburg and Richmond, Va., Hiram left with the regiment and was finally mustered in as private, Co. H, on October 24, 1864, while at Baltimore, MD.

The 109th USCI witnessed the fall of Petersburg, participated in the pursuit of Lee in April 1865 and was present at Appomattox Court House when Lee surrendered his army, April 9, 1865. Despite the end of the war, the 109th USCI did not immediately return home but embarked for Texas as part of an American build-up intended to discourage French operations in Mexico. The 109th USCI operated along the Rio Grande, Texas, until March, 1866. The regiment was finally mustered out at Louisville, KY on March 21, 1866.

It is very likely that more African-Americans from Eastern Kentucky served in the Union Army during the Civil War than are listed in this article. More extensive research will be necessary to discover their names in order to appreciate their service and sacrifices for this country.


Compiled and researched by Marlitta H. Perkins, March 2011. This specific article is under full copyright. Copyright © 2011, All Rights Reserved.

Posted by Marlitta H. Perkins at 6:51 PM No comments: