Confederate General John B. Floyd and the Warfield Saltworks 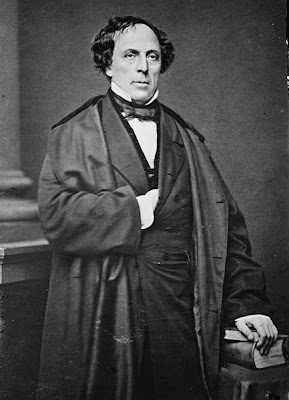 John B. Floyd
Image from the Brady-Handy Photograph Collection (Library of Congress)
Warfield was established in the early 1850's as a coal, salt and lumber community by George Rogers Clark Floyd and John Warfield of Va. It is located on the Tug Fork of the Big Sandy River. Products such as salt, which was an essential preservative for farmers and for traders of salt pork, were shipped by river boats to Cattlettsburg. In 1870, Warfield became the first county seat of the newly created Martin County, KY.

John B. Floyd, son of VA governor John Floyd, was born in Smithfield, Montgomery County on June 1, 1806. He graduated from Columbia College in South Carolina in 1829 and lived three years in Arkansas before returning to Virginia to practice law in Washington County.

He served in the VA state legislature from 1847 until 1849 and as governor of Virginia from 1849 to 1852. He supported James Buchanan during his campaign for US president and upon his election Floyd was appointed sceretary of war. Floyd held this post from 1857 to December 1860, which he resigned, being a Southerner in his convictions and beliefs, after Major Robert Anderson’s occupation of Fort Sumner, SC.

On May 23, 1861, Floyd was commissioned brigadier-general in the Confederate Army. He saw his first service at Carnifex Ferry, Va., Sept. 10, 1861, where he was wounded. He was the senior commander at Fort Donelson in February 1862, when Grant advanced from Cairo upon the fort. Floyd refused to surrender, withdrew with a large part of his brigade, and reached Nashville in safety. He subsequently had command of the "Virginia State Line," which operated mainly in western and southwestern Virginia.

Warfield
At the beginning of hostilities production had ceased at Warfield and the coal mines were used throughout the Civil War as hiding place against marauding by enemy. On Aug. 16, 1862, according to Damian Beach, Confederate cavalry repulsed and defeated a unit of Kentucky Home Guards near Warfield."

Health reasons forced Floyd to return home to Abingdon where he died on 26 August 1863 at the age of 57, at the home of his adoptive daughter, Mrs. Eliza Johnston Hughes, a niece of Confederate Maj. General Joseph E. Johnston. Her husband Robert W. Hughes was a US district judge from Norfolk, Virginia. Just eight days prior to his death, on Aug. 18, 1863, John B. Floyd had bequeathed all his estate to his wife Sallie B. Floyd.
[John B. Floyd Will, Martin Co. Will Book]

On Sept. 14, 1866, after the close of the Civil War, the Moores, Gallups and Tromstines sold the Warfield property to Robert W. Hughes for $ 3500, relinquishing all rights and title to the said property under the former sheriff's sale in Lawrence Co.
[Lawrence Co. Deed Book H, p. 522]

Warfield Map, 1879
For larger image, click on map
In December 1881, a correspondent of the Louisville Courier-Journal reported that "After a series of years of failure, mismanagement and disappointments, the [Warfield] estate fell into the hands of James A. Barrett of Martin Co., KY, a colonel in the Confederate army and a gentleman of rare intelligence. Knowing the value of associating capital in joint stock companies, Mr. Barrett has capitalized his estate and formed a company that develop its vast resources and bring untold wealth to its members."