This is the second post in a series dealing with Union burials in Eastern Kentucky. It focuses on burials in Lawrence County.

Throughout the years I have received numerous inquiries regarding the burial sites of Union soldiers who died in Eastern Kentucky during the Civil War. Contrary to popular (or logical) assumption the majority of these men are not resting in Kentucky soil but were taken to Indiana to be re-interred in the New Albany National Cemetery. For a detailed explanation, please read my introduction here. 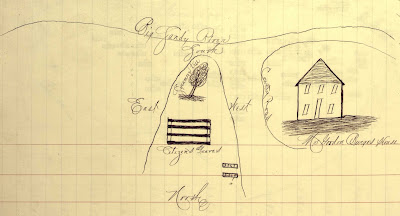 Buried in Citizens Graveyard on Gordon Burges farm, 3 miles below Peach Orchard opposite George's Creek on a ridge 1/3 mile north of Big Sandy River. Died on George's Creek but taken to opposite side of River for burial. 350 yards north East of Mr. Burges House and 60 yds North of Sycamore tree ~ Head lying west.
Two brothers, belonged to the same Regiment and Company and died the same month. Were identified by Mr. Burges who was present at burial. 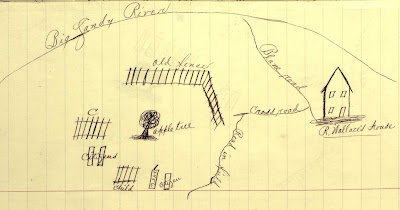 Buried 2 Miles west of Louisa on J. W. Hawes' farm in an old field among some citizens graves, his child is buried on right side facing west, graves marked "C" in plat are Citizens. Apple tree 15 yards N. E. of grave.

# 2457 George Willis, Private, Co. F, 39th KY Inf., d. January 12, 1865. Was murdered at his house by some robbers ~ 1 mile North West from where he was buried. His family has since moved to Ohio ~ was identified by citizens who helped to bury him. ~ His child was buried on the right side of Willis' grave, facing west.
According to his service records, he was "Killed by Rebels."  Lieutenant Augustus Kendrick, Co. F, 39th Kentucky Infantry, stated that the command was just returning from a raid on Saltville, Virginia, and that while on the march, Willis was furloughed to come by his home. He was killed by "Gurillas" on the night of January 12, 1865. Colonel George W. Gallup (14th Kentucky Infantry) who, at the time, was commander of the Military District of Eastern Kentucky, stated that George Willis was killed in the line of duty. His house was approximately 1/2 mile from camp but still within the vidette line. Gallup, with a detachment of cavalry, went in pursuit of the guilty parties who were subsequently captured. ~ NANC Sec. A, # 16/16.

Roll of honor; names of soldiers who died in defense of the American union, interred in the national [and other] cemeteries. 27 volumes. (Available on Hathi Trust Digital Library)


Article researched and written by Marlitta H. Perkins, February 2018. Unauthorized use and/or duplication without express written notice by the author is strictly prohibited.