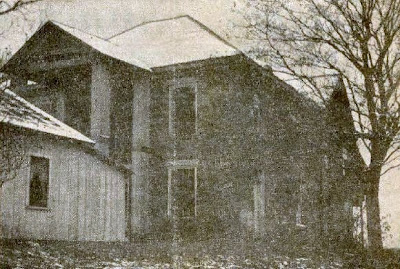 Landsdowne Hall in 1942
During the night of September 30, 1861, one of the earliest skirmishes of the Civil War in Eastern Kentucky took place at Landsdowne Hall, an impressive brick mansion which stood a half a mile distant from Grayson, Carter County, Kentucky, and was owned by Dr. Andrew Jackson Landsdowne. 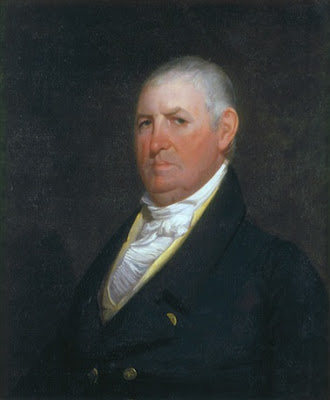 Isaac Shelby, Kentucky's first governor
Susan Carter was mainly responsible for the construction of the house. She hired a brick layer and had the bricks made on site by slaves. The house was finally finished in the 1830’s. Her husband Colonel William Carter was a state senator, representing Lewis, Greenup and Lawrence Counties from 1834-1838. Carter County, Kentucky, was named for him. Upon his death from cholera in 1849, Susan Carter sold the house to Dr. Andrew Jackson Landsdowne, along with 3000 acres, for which he paid in gold. He gave the estate the name “Luck Enough” but soon changed it to “Landsdowne Hall.”

Landsdowne was born on October 14, 1814, in Prince William County, Virginia, the only son of Colonel George Landsdowne and Lucy Robinson. His mother died when he was still a small boy. His father moved to Kentucky and in 1819 married the widow of Richard Menefee, state legislator and one of Owingsville's founders. In 1830, Colonel Landsdowne purchased Olympian Springs, 36 miles east of Lexington, a popular resort known for the spring's medicinal value. In 1833, many Kentuckians summered at Olympian Springs to escape the cholera epidemic that swept Kentucky. 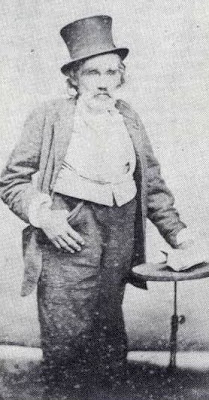 Dr. Andrew Jackson Landsdowne, ca. 1861
Andrew Jackson Landsdowne received his medical education at Transylvania University and in 1840 moved from Bath to Carter County, Kentucky. On May 24, 1842, he married Mary Buckner Hord, daughter of Col. Thomas Todd Hord. The 1860 Carter County, Kentucky Federal Census indicates that Dr. Landsdowne was a well to-do man and, aside from his real estate holdings, owned a considerable amount of private property. This included 11 slaves who were living in two slave houses built on the property.

Soon after the Civil War began, the Landsdowne family began aiding the South by providing food and shelter to men on their way to the Confederate Army. During the night of September 29, 1861, a group of 25 men assembled near Greenupsburg, for the purpose of making a descent upon Grayson and disarming the Union home guards and then making off to the Confederate recruiting camp in Prestonsburg, according to Union sources. Landsdowne Hall was chosen as the place of rendezvous. However, their presence was soon detected and immediately reported.

While eating dinner with the Landsdowne family, the men were surprised by 15 home guards under Captain McGuire who surrounded the house. According to a report by Col. Eifort of the Grayson Home Guard and Captain W. C. Stewart of Kinniconick, Lewis County, Kentucky, “one of the secesh rushed out, drew a revolver, and exclaimed, ‘Shoot, and be G-d d-d.’ A lad thirteen years of age, son of Judge McGuire, obeyed orders, and shot the fellow through the heart. The firing then commenced and lasted about five minutes, when the secesh stampeded.” Four men escaped, including a lawyer by the name of McCombs, law partner of Judge Adams. Nine year old Julia Landsdowne, with her mother and two of the slaves, fled down the hill toward the Little Sandy River and were being shot at. Julia Landsdowne later recalled, “I was shot at good and proper. Bullets whistled right through my clothes and my mother’s.”

Captain McGuire’s men captured twelve horses and the weapons of the rebels. Julia Landsdowne later claimed that the home guard looted the house right after the fight. “One of those no-count Yankees,” she said, fairly shouting in her indignation, “pointed to the dining room table and cried, ‘a damn pretty table for Rebels!’ Then he took a rifle and smashed everything in sight.”

As soon as word of the incident had spread, "the country...was in a blaze of excitement," according to the Ironton Register. "Reports had it that Grayson had been burned, and the number of rebels marching for the Ohio was 1,500..." Within a short time, more than a thousand Union men from the surrouding counties had mobilized and were at Grayson,"to defend the place", including a home guard company from Boyd County.

The prisoners were taken to Louisville. After being brought to trial, Dr. Andrew Jackson Landsdowne was released on condition of taking the oath of allegiance. Records show that after his return, Dr. Landsdowne left Carter County for the duration of the war and moved to Boyd County, Kentucky. He leased to George W. Mead, "Dr. Lansdowne's salt furnace, with all the appurtenances thoreto belonging, together with salt wells sufficient for the manufacture of salt at said furnace and the privilege of using coal, &c., in the business of making salt. Also ‘the house and premises thereto belonging, known as the said Dr. Lansdowne's new store, for three years from said date,' in consideration of the said Mead building a yard fence around said house and putting it in general good repair. Also to construct a salt furnace for the manufacture of salt at the furnace above described and opening and working such wells as the said Mead may deem most expedient." 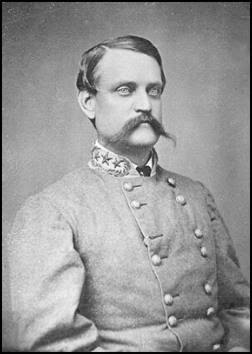 Major General John C. Breckenridge
Calling herself "the only Confederate Veteran in Carter County", Julia Landsdowne remained indignant for the rest of her life about the affair that took place at her home in the fall of 1861. It must have given the nineteen year old Julia a certain degree of satisfaction when former US Vice-President and Confederate General John C. Breckenridge presented her with a medal of approval in 1871, for managing, “to protect some Confederate prisoners from a mob.” It was an engraved coin which was given to the General by a dying Confederate soldier, and was carried by Breckenridge all through the Confederacy and his European exile, so that, as he gleefully remarked, "I never was without a dollar in my pocket."

Sadly, Landsdowne Hall is no more. Ravaged by time, it was only a shadow of its former past when the house’s image was last captured by a photographer of the Huntington Herald-Dispatch on a cold January morning in January 1942. All we have left now are the memories.